This quilt, Urban Nine Patch, was finished in April.  I had a deadline for this quilt, because it was my choice of quilt to hang in the Invitational Show at Quilt Canada 2015, which was hosted by my local traditional guild in Lethbridge at the beginning of June.  It was very, very busy heading up to the show, and I intended to blog about it after it had hung there, but then life stayed busy, with school wrapping up for the year, followed by a 2 week trip to BC to visit family, after which my church had their VBS, which I am heavily involved with, and now I am in the midst of summer swimming lessons.  Since life doesn’t seem to get less busy, I figured I just need to prioritize my blog more and make time for it even when it seems like I can’t. 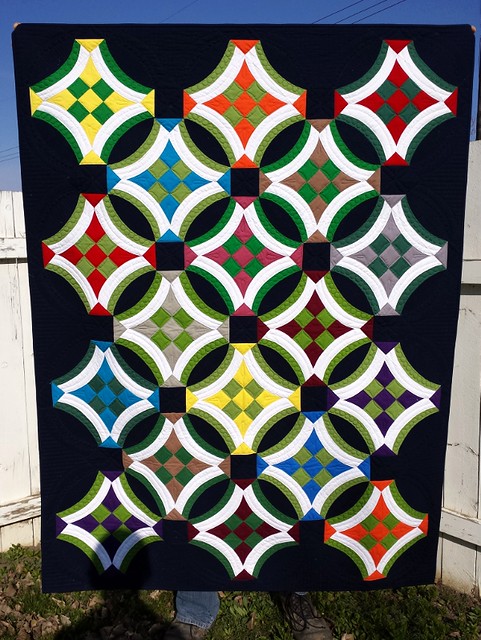 I began this quilt a long time ago, way back when the Quick Curve Ruler first came out.  In fact, I started this when the pattern was still free and listed on Jenny Pedigo’s site, Sew Kind of Wonderful.  It’s not free anymore, but it’s a really good pattern and definitely worth  buying.  I worked on it a few blocks at a time, pulling it out every few months and then packing it up again.  Deciding that this was my quilt for the Invitational Show motivated me to finally finish it. 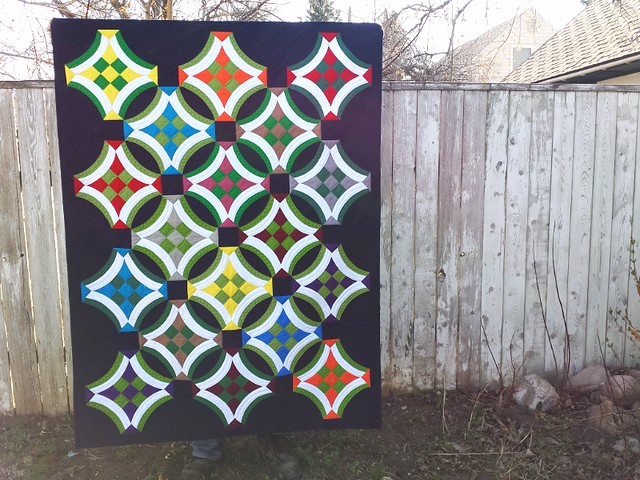 I had this quilt professionally long-armed by Andrea Harris, who blogs at Urban Quiltworks.  She lives in Calgary so I dropped it off there when I visited my brother once, and then she mailed it back to me when it was done.  She did an amazing job!  I was so thrilled when I opened up the package.  It was exactly what I hoped it would be. 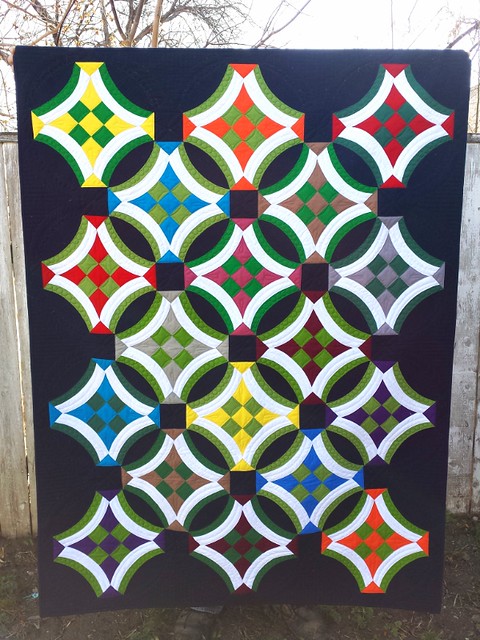 My friend Chelsie took this photo for me at Quilt Canada, where it was hanging. My volunteer shift was white gloving and I was stationed right in the area where it hung, so I got to hear lots of comments on it from the visitors to the show. They were all positive, thankfully. 🙂 One thing specifically that I noticed was how many of the male guests particularly liked it. Whether they were husbands of quilters, or quilters themselves, or just men who appreciated fine art, they would pause there longer than their female counterpoints and stand and look at it. One husband actually called his wife back from a hew quilts ahead to ask her to come back and take a picture of it.  I never thought before about how my work appeals to different genders, but it was definitely interesting to see. 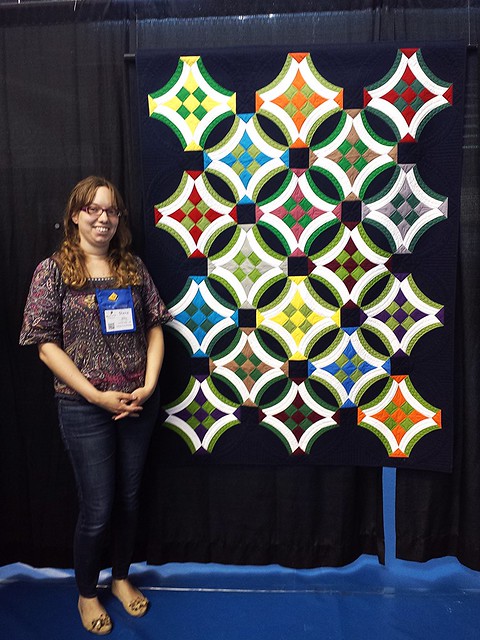 The colours are the truest in the first picture I posted, the one taken in full sun, so I put that one here again. I love how the different greens that I chose affected the other colours in the blocks.  The blues and reds are the two that I see the most variation in, even though I used the same reds and the same blues.  Colour is so fascinating, don’t you think?